My Sims forum for house builders and custom content creators is almost done!

Just got word from The Sims Team that we won’t have toddlers or pools in the base game of The Sims 4! That’s a giant leap back from what we’ve had. The only time we didn’t have those things was in the Sims 1 and TS1 had pools so wtf is the problem?! I get that they’re trying to accommodate lower end machines but this is just too far. I like playing with my Sims’ babies. Babies. I didn’t say kids. I said a specific age group.

Which brings me to this: Our Sims will be able to have babies, but will they age from newborn baby to kid straight away? Or will they just be born as kids?

This is a fail all around. I just don’t understand how they could do this.

The Sims Gurus are trying to get around it by saying “Oh well we have new fountain building tools, so shut up and be happy! :D”

No. I will NOT be happy EA! Fountain building is not pool building, and it sure as hell is not toddlers.

I think I’m going to stick with The Sims 3. This is absolute bullshit.

Comment below and tell me what you think of this new major update.

The new Create-A-Sim tool in The Sims 4 is one of the most powerful in the game. It’s been completely overhauled from The Sims 3 wardrobe-style customization, and thanks to its wide variety of features, it’s now much easier to make your perfect Sims. I recently went hands-on with Create-A-Sim for an in-depth look at everything it has to offer.

I’ll be honest, and admit I’ve spent a ton of time messing with Create-A-Sim inThe Sims 3, trying to get my Sims looking just as I hoped. It’s not exactly easy to create everyone in your life in The Sims 3 though, as it simply doesn’t let you customize certain details. But now that The Sims 4 Create-A-Sim is here, those days are long gone.

Starting off with a new Sim, the only sliders you’ll use are for his (or her) weight and fitness level. Once you’ve got that down, you’ll use your mouse to select any part of your Sim to adjust him however you want. If you want your Sim to be fat, drag out his belly until you reach the desired bloated effect. Do you want him to have giant forearms and a broad chest? Easy. You can even change a Sim’s posture this time around by dragging his spine, making him slump or stand tall.

Finally we have all the answers to the questions you guys sent in about animations in The Sims 4 a while ago! I want to thank Joyce and Marion for this opportunity and Marion for taking the time to write me back!

SimGoodie: Will babies have more animations depending on emotions?
Marion: Our babies are either happy or they cry, much like babies in real life :). However, the Sims in the baby’s environment are affected emotionally by the baby’s mood, and will react accordingly. We also have some fun interactions with the baby – I am excited that mothers can breastfeed as well as use a bottle, and there is a really funny ‘Make Face’ interaction that I like a lot.

SimGoodie:  What cool animations can we see with grim the reaper and death in this generation of The Sims?
Marion: The Reaper himself has a new look (including fun new accessories) which I really love. His reaping sequence has been updated to fit our more modern style, and of course there is now an emotional dimension to the reaping that wasn’t there in previous titles.

I am also very excited about the new emotion-related deaths we have – death by laughter is very funny, and who couldn’t relate to death by embarrassment!

SimGoodie: Is there gonna be idle animations for when Sims are just by themselves relaxing or watching tv, etc?
Marion: When our Sims idle, they express their emotions through small emotion animations and facial animations. We also have different idle poses for male and female Sims, and some variety in the sitting idles. There are also small actions Sims can do occasionally. Older Sims for example will sometimes complain about a backache.

Watching TV has a very large suite of animations with many different actions that are both based on what the Sim is watching and what the Sim’s current emotion state is. I am certain that you will be impressed with the variety there!

SimGoodie: Will the animation of clothing be more natural and will they move with the Sims? Will hair move in the wind like we saw in the arrival trailer?
Marion: Those are great questions. I will answer both at the same time, as the answer is very similar for both.

When you start a big project like a new Sims base game, there is always a moment where you have to make hard decisions about what features you want to support.

Hair and cloth are large and complicated features that are time consuming to implement and support. Our goal in animation forThe Sims 4 was to  create Sims with rich emotions and an interesting inner life. We wanted this to be expressed visually as well as in game play. As a secondary goal for animation, we also focused on creating a robust, fluid, and responsive animation system that does not get in the way of you playing the game the way you want to. Getting there was a big task and we felt that trying to also do simulated clothes and hair would have meant taking on an unacceptable risk for our primary goals.

The other big reason for why we did not do clothes and hair for The Sims 4 was performance. Simulating clothing and hair eats up a lot of processing power. Unlike most other games, the Sims runs a sophisticated simulation for every character in the world. This simulation is very taxing on your computer, as I am sure all of you are aware!  In addition to that, we also have many fans who have older, less powerful computers, and we wanted to make sure that all of our fans can play the game and have an enjoyable experience.

That said, I have certainly spent lots of time thinking about how we might be able do this for the Sims, and both hair and cloth are at the top of my wish list for the future.

SimGoodie: How did you go about to make the animations for the game? How is the workflow for new animations? What programs do you use?
Marion: I’ll combine the answers to these two also.

The actual animation process is very much like the process for traditional 3D film animation:

First, our designers will give us a document that specifies what interactions they would like to see for the object  – for example, for the exercise machine they might say that Sims should be able to do leg lifts, fly presses, and pulldowns, and that there should be a skill progression. We usually have a meeting to talk about the design, to make sure that everyone understands the requirements and that there are no technical problems with the design.

We use Autodesk® Maya®to animate, with  a custom toolset created by our very talented technical artist.

We have a standard Sim in Maya®  (a female in a skin tight suit) with 100+ animatable controls. The animator will load the Simsand objects needed (in this case one Sim and the exercise machine). Then he or she creates poses for the Sim that are loosely based on the reference. We don’t usually copy the video, instead we use it as inspiration and general reference. The animator will start with a rough sketch of the motion, just a few poses and very rough timing. The animation is refined gradually over several days with regular feedback from the animation director.  Depending on how complicated the interaction is and how many variations we need to create, an interaction can take anywhere from three days to over 100 days to complete.

Here is a screen shot of the Sim we use to animate:

When the animation is approved, we create the technical markup. This includes marking up visibility for props, attaching objects to the Sim’s hands, and creating markup that allows our animations to play on differently shaped Sims.

Next we take the animations into a custom in-house sequencing tool, called Swing. Here we define allowable sequences of animations (we call them state machines), and create more technical markup. This is also our preview tool, where we can test that the animations work well in the game engine.

The animations and state machines are then handed off to the gameplay, sound, and effects teams, and the animator moves on to the next interaction.

SimGoodie: How long have you been working on The Sims and do you enjoy it?
Marion: I was hired in 2003 for The Sims 2 base game. I have worked on The Sims franchise for more than eleven years, and I was involved in three base games (The Sims 2, The Sims 3, and The Sims 4) and many expansion packs in that time.

Working on The Sims is a fun and challenging experience! Humans are very complex creatures, and simulating our behavior in a game presents us with a never ending stream of fun and interesting problems to solve. For example, for this game, we took a closer look at how people really behave when they are talking to each other, and we tried to simulate that. It was fascinating to see how many small things we do that we don’t even notice – how we make space for each other, where we choose to stand, who we look at, and so on.  While we were working on that feature none of us could have a normal conversation anymore because we were constantly aware of how we were taking little steps and turning our bodies!

Source For those of you who do not understand Norsk (Norwegian), click the English tab!

In Germany’s latest issue of “Sims Official Magazine”, images of the genetics system in TS4 have been revealed! The system will allow a player to create children, teens, adults, elders, and give them the ability to be related to one another. (Think of the engine in The Sims 3 which allowed a player to finally make Sims a couple rather than just roommates or married.) Here are some screenshots of the new system. 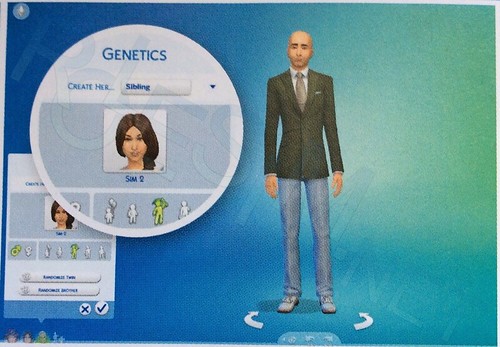 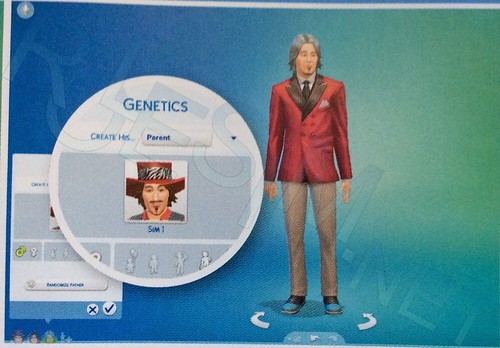 The screenshot below shows that only children can be created in CAS, but it is unclear if the game engine in the pictures provided is up to date since the icons look a little different from the ones shown at E3. 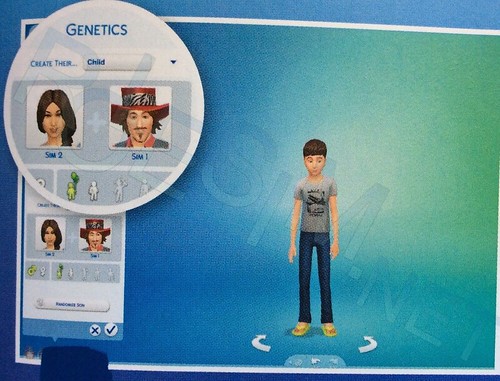 What do you guys think of Create-A-Sim so far? Comment below to discuss!